In 1780, Carington Bowles brought an action against the prominent print and mapseller, Robert Sayer, and his partner John Bennett. The case involved a dispute over an agreement made between Bowles and Sayer regarding a map of Scotland. Bowles claimed that he had entered into an agreement with Sayer to purchase a one third share of four large copper plates depicting a map of Scotland for the sum of 27 pounds, 7 shillings and 6 pence. According to Bowles, the terms of the agreement were that the parties would share the costs of printing and publishing copies of the map in proportion to their shares, and receive the proportionate number of copies to sell. If either party sold off their share of the copies and wanted more for sale before the other party had sold off his share, then he would purchase more copies from the other party ‘at the Customary price given by the Trade in partnership of the kind’. To protect each party from any ‘fraudulent or sinister attempt’ by the other to subvert this agreement, it was agreed that Bowles should keep two of the copper plates in this possession, and Sayer should keep the other two. Bowles claimed that Sayer took John Bennett into partnership with him, and they began selling the map at an underprice. Having disposed of all their maps, they approached Bowles asking him to issue a new edition or impression, but Bowles refused, as he had not sold all of his copies and offered to sell some to Sayer at the customary price. Bowles then alleged that Sayer and Bennett had engraved two new copper plates, with additions and alterations ‘to prevent a discovery of their sinister practices’, and removing Bowles’ name from the advertisement at the foot of the title. They then sold ‘many thousand copies of such altered and pirated Map’.

In his Answer, Sayer disputed many of the particulars alleged by Bowles. While he conceded he had printed new editions or impressions of the map without informing Bowles, he argued he was entitled to have new copper plates engraved, based upon the prints of the map, because the map in question had been first published before the Engravings Act of 1767 had been passed, and so was not protected by it: ‘Therefore, these Defendants or either of them or any other person or persons was and are or is at Liberty to engrave on new plates all or any part of the said map and to print and sell Copies of the said Map or any part thereof from such new plates without the Consent privity or Knowledge of the said Complainant or any person or persons.’ Sayer also accused Bowles of having pirated his own map of Ireland and other maps. In the end, however, the parties reached an agreement and were reported to the Court as having “accommodated” their differences. 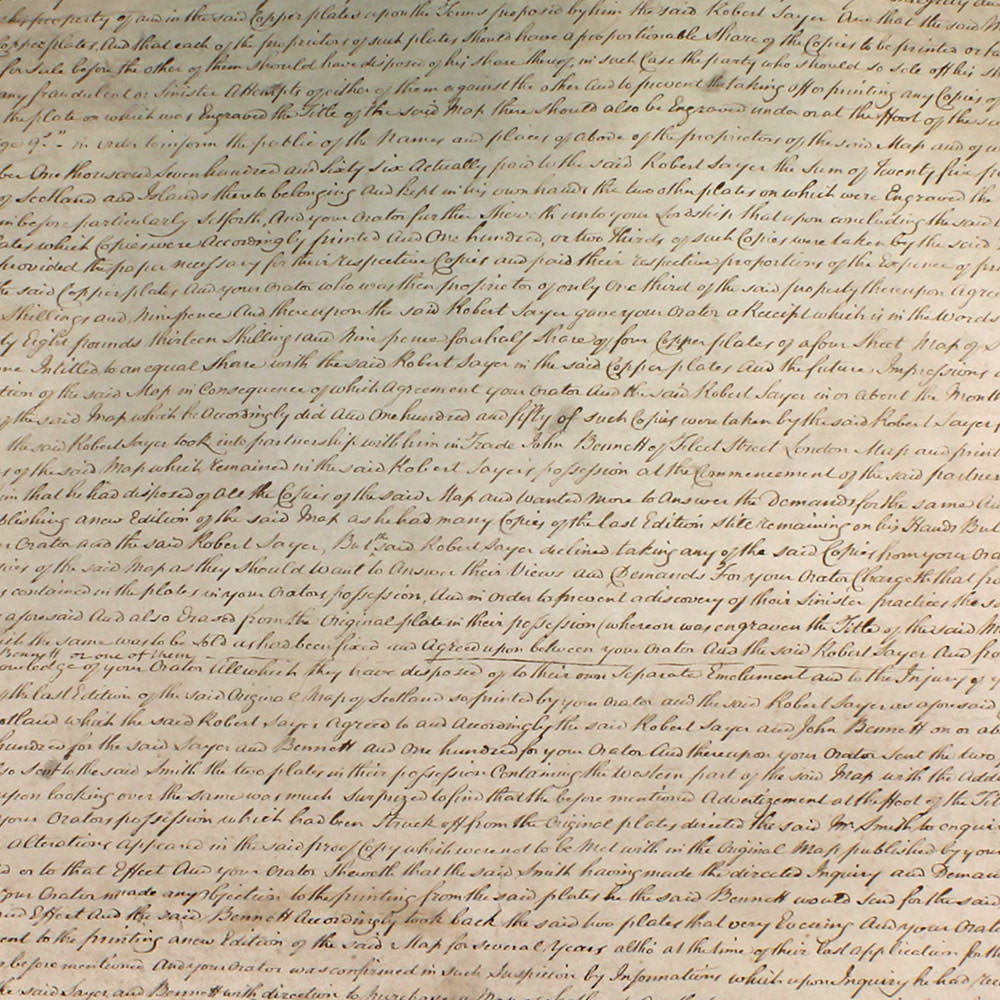 The Complaint of Carington Bowles, 12 June 1780, Manuscript 1 | Scroll to zoom 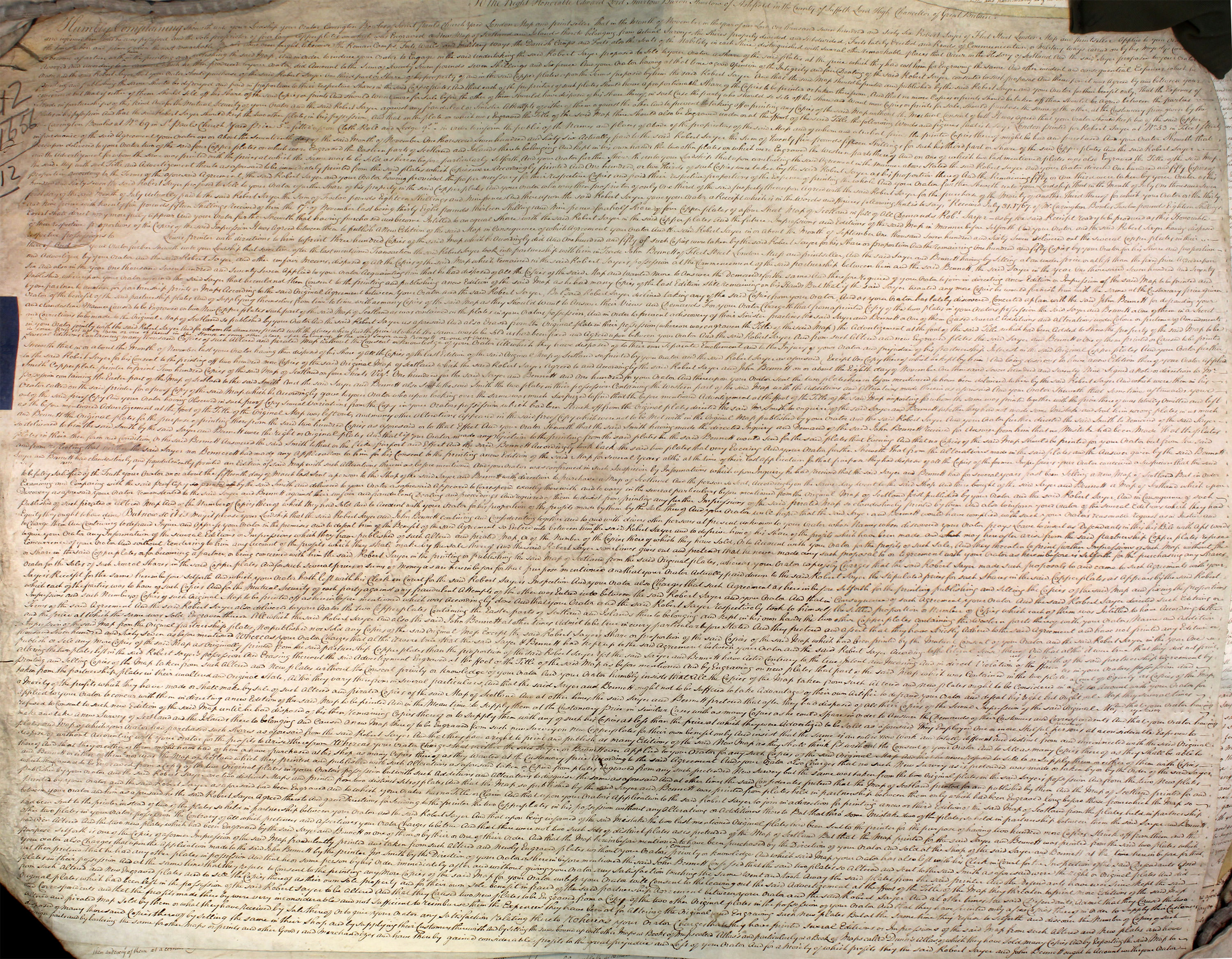 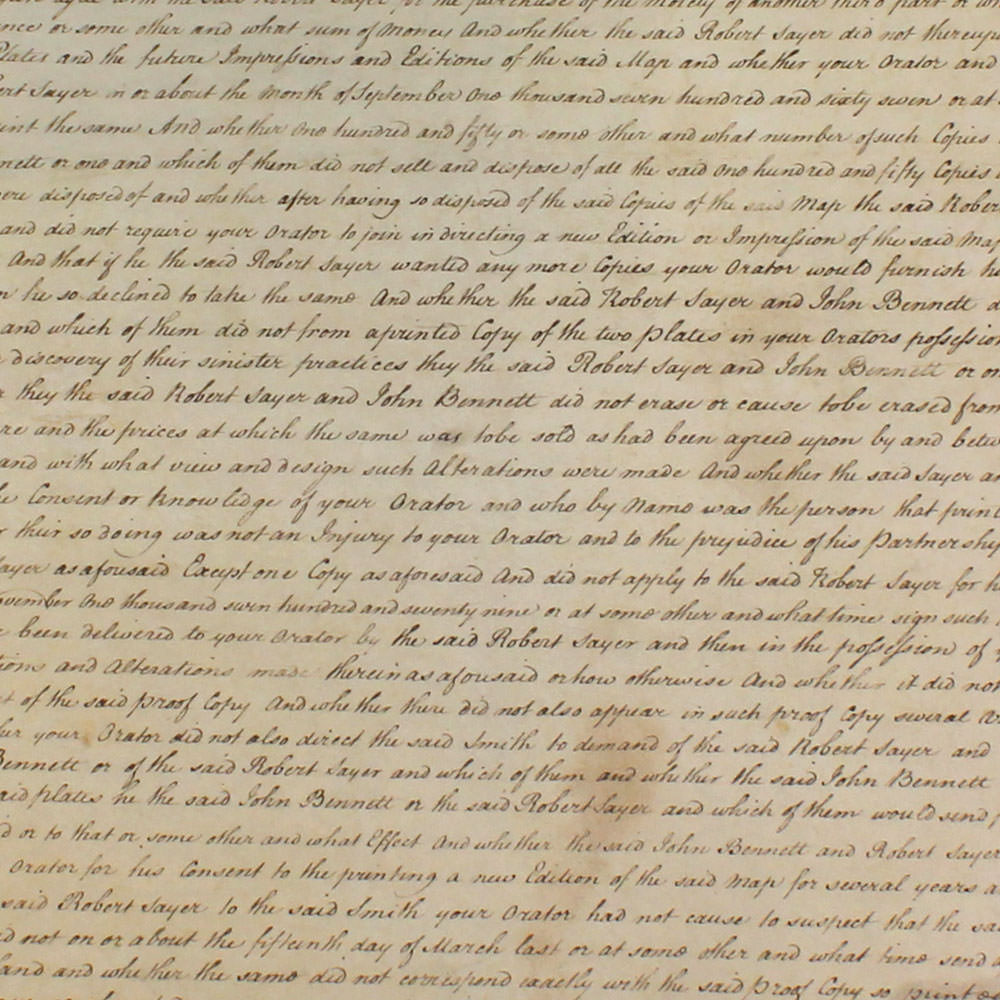 The Complaint of Carington Bowles, 12 June 1780, Manuscript 2| Scroll to zoom 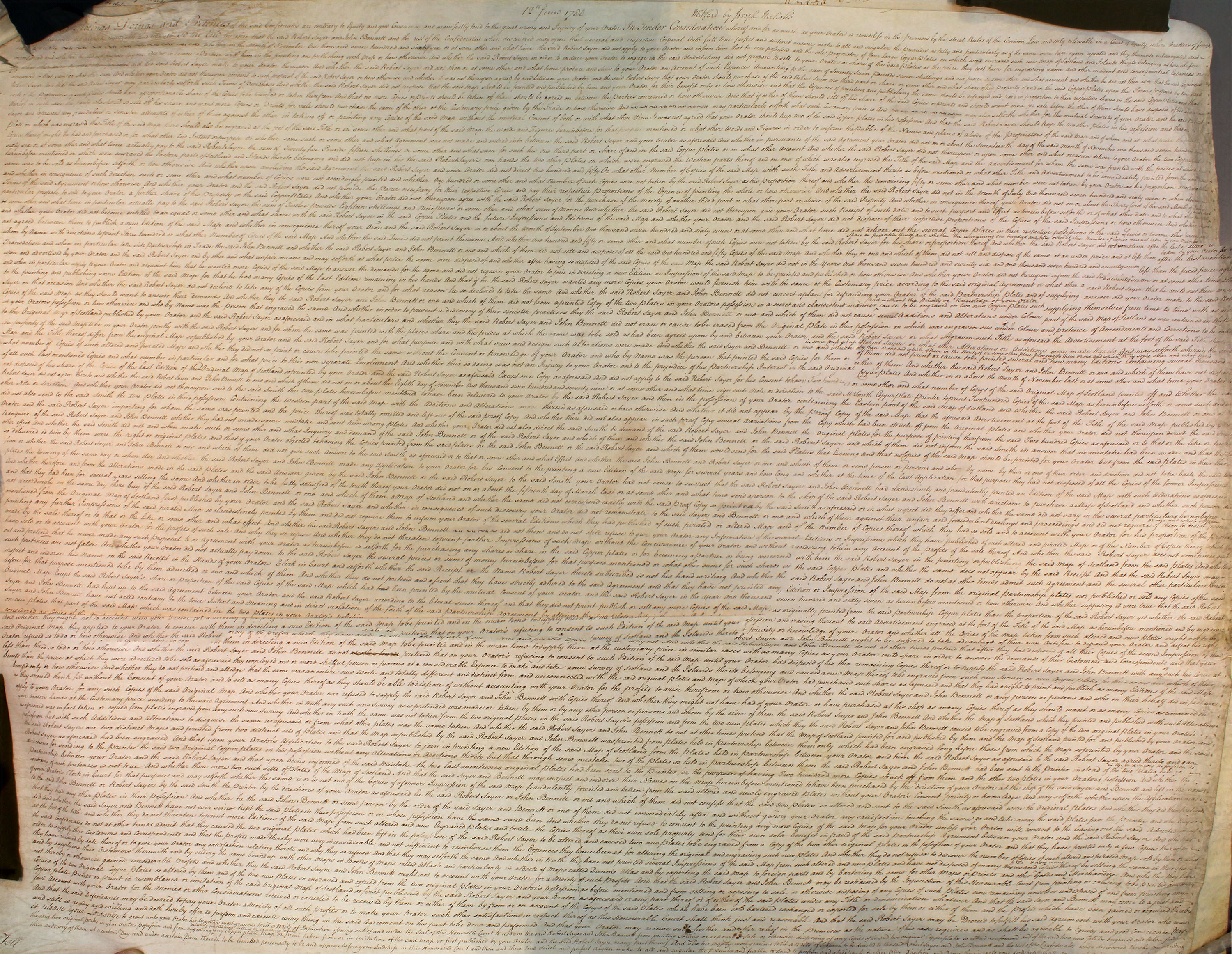 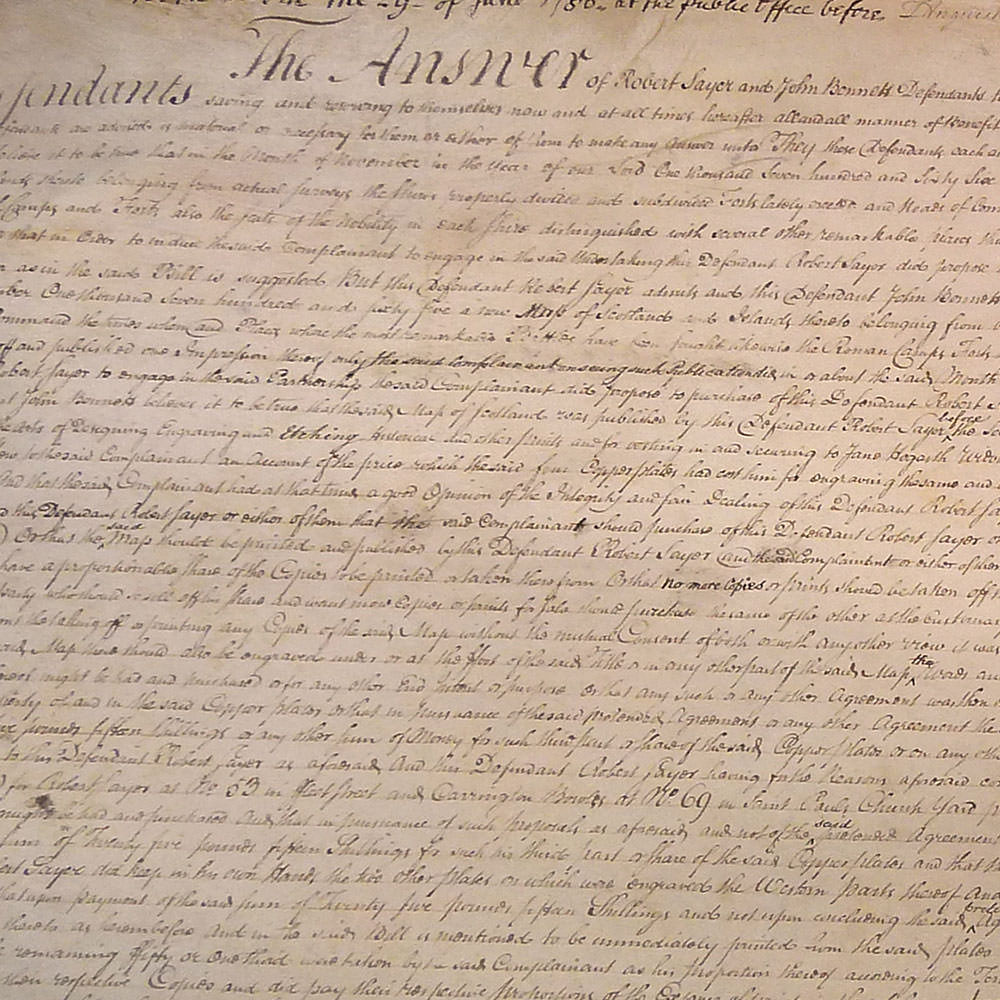 The Answer of Robert Sayer and John Bennett, 29 June 1780, Manuscript 3| Scroll to zoom 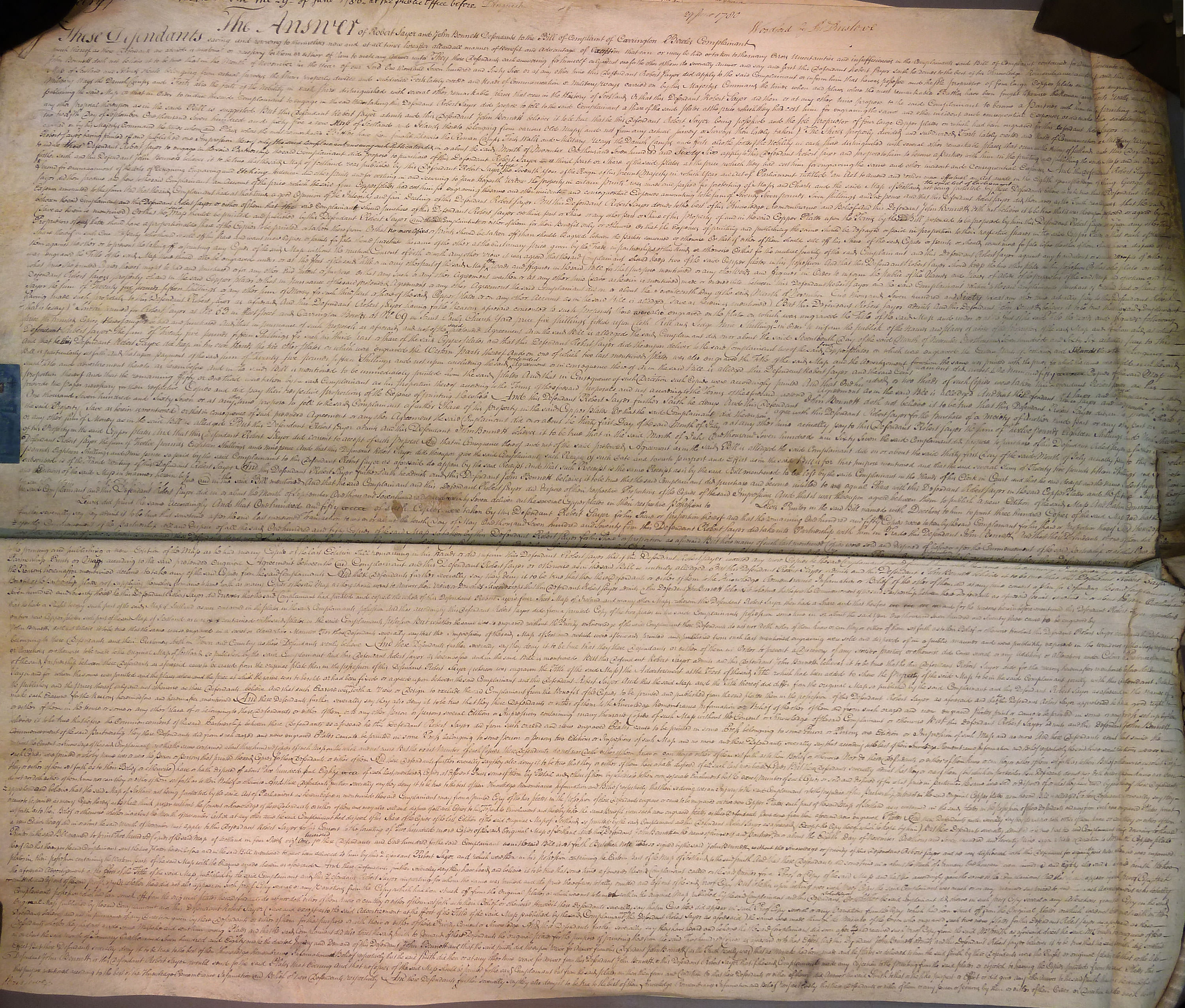 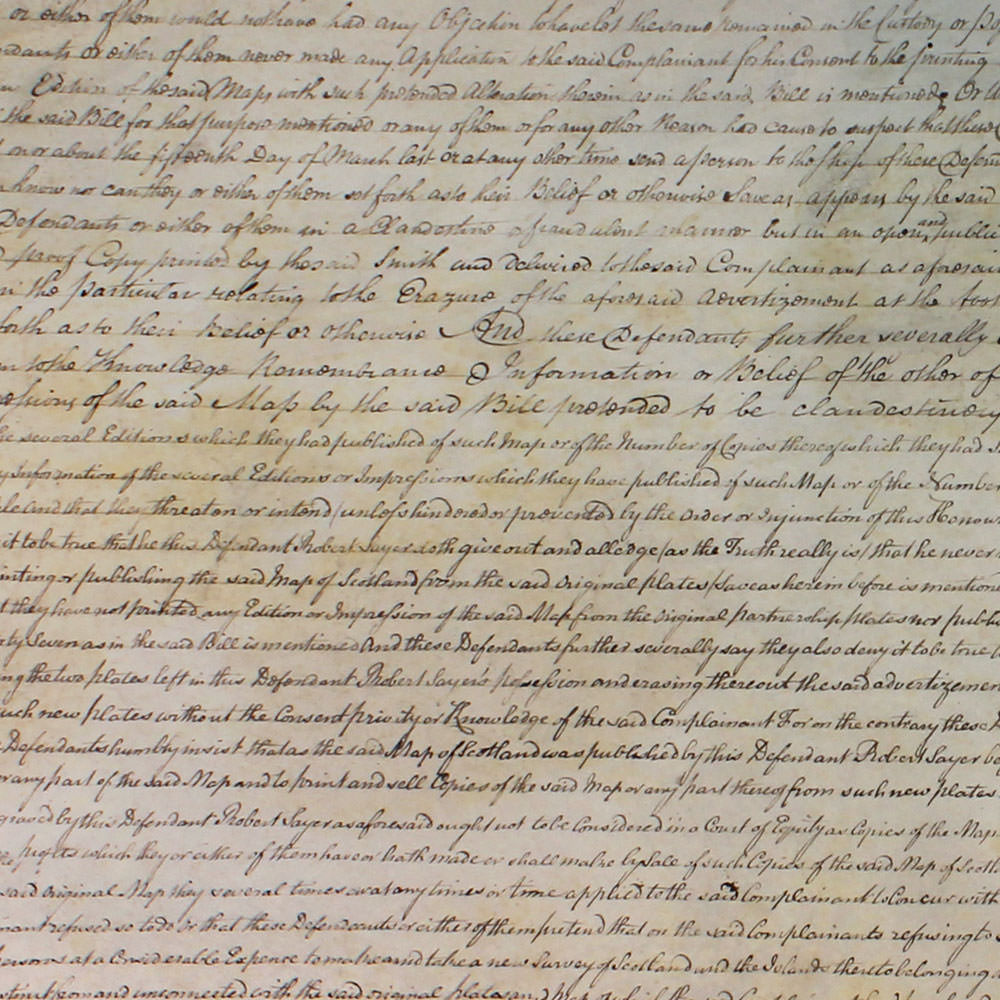 The Answer of Robert Sayer and John Bennett, 29 June 1780, Manuscript 4 | Scroll to zoom 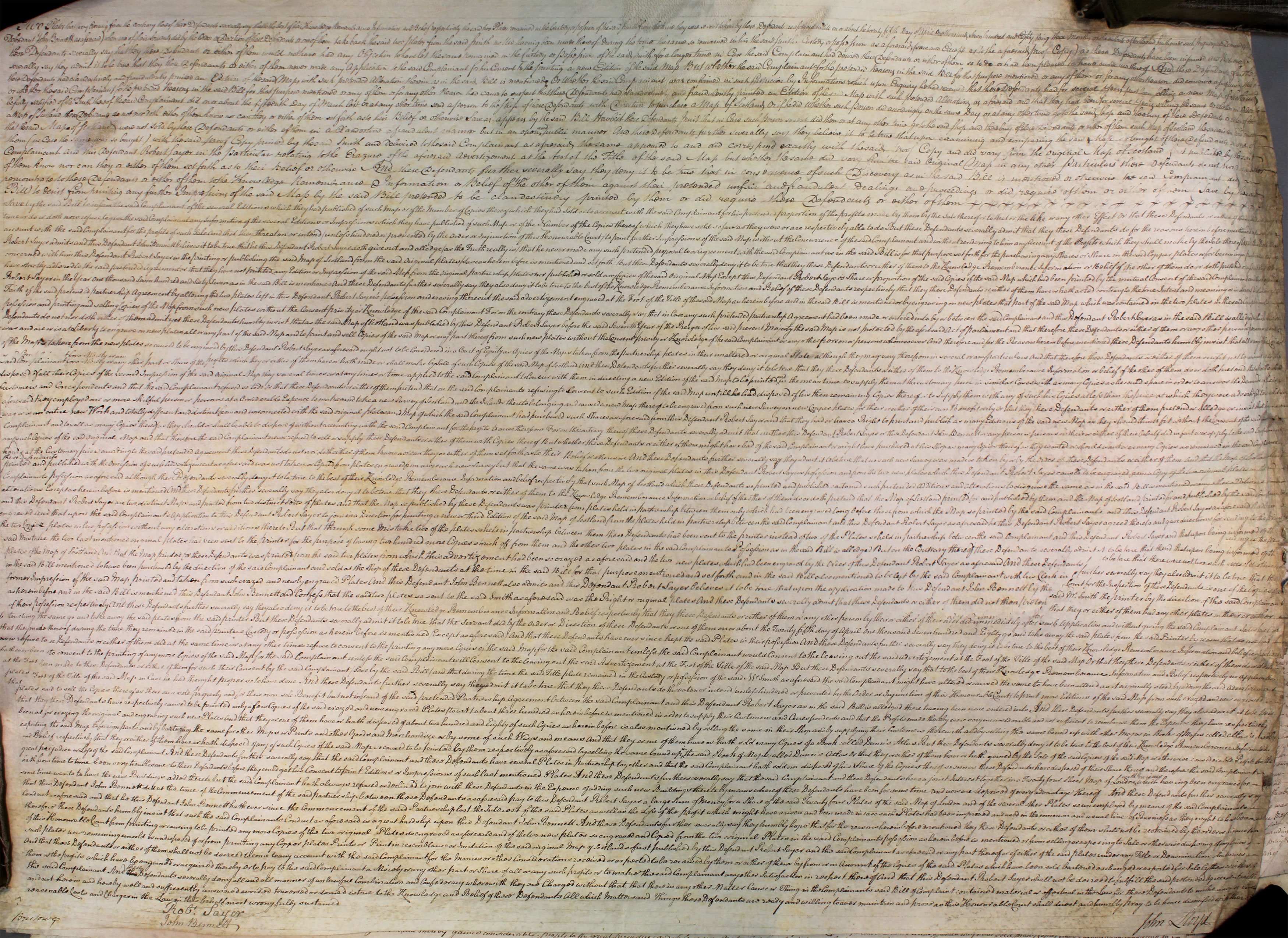 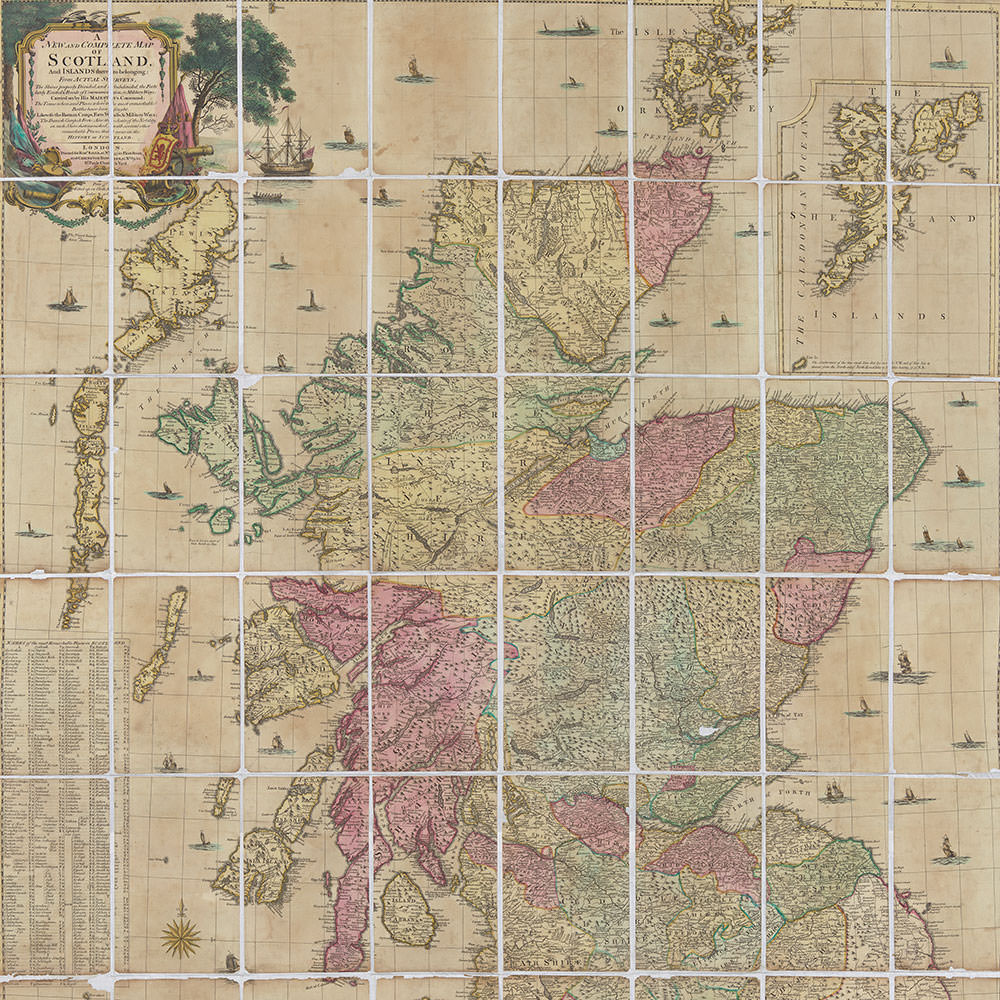 A New and Complete Map of Scotland. London. An undated map, printed for Robert Sayer and Carington Bowles | Scroll to zoom 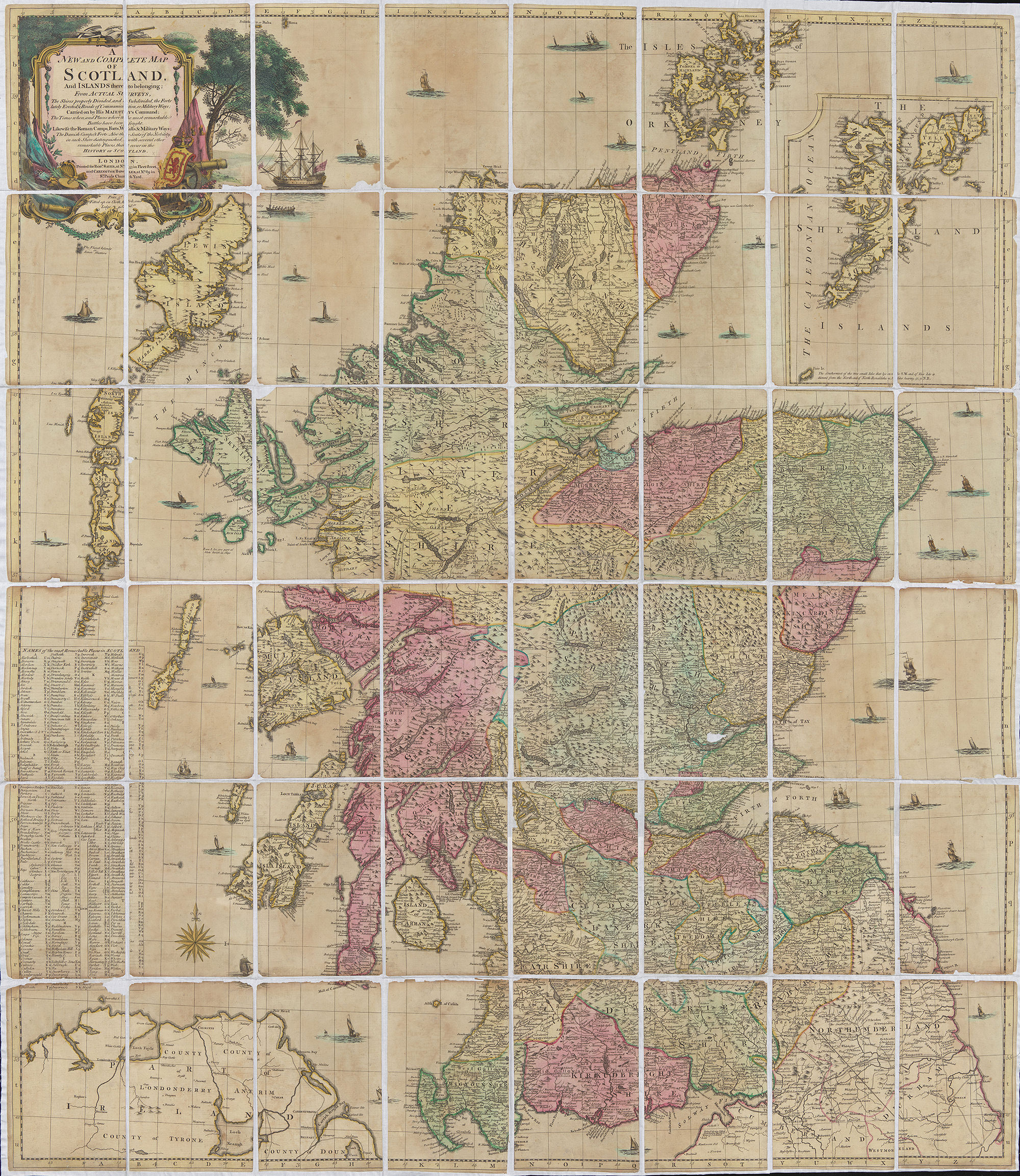 A New and Complete Map of Scotland. London. An undated map, printed for Robert Sayer and Carington Bowles. (Reproduced by kind permission of the Syndics of Cambridge University Library, Maps.c.120.78.2) 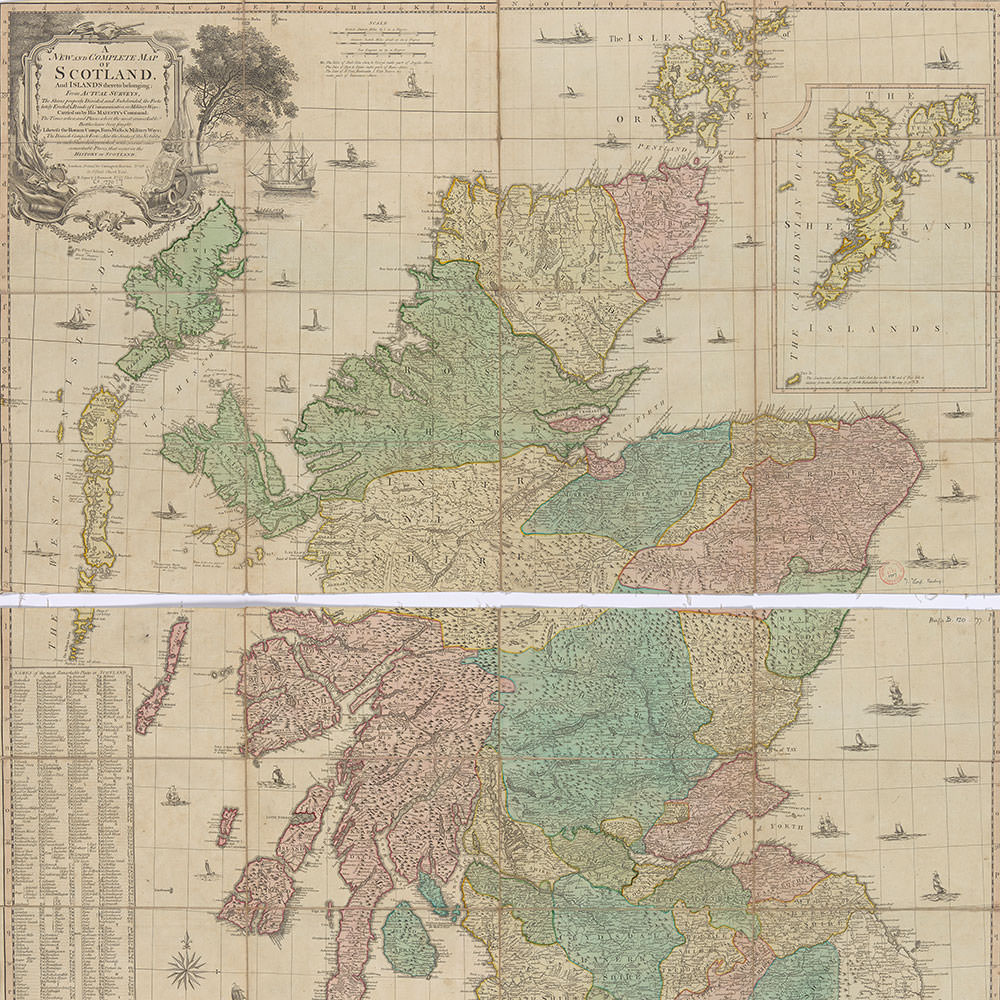 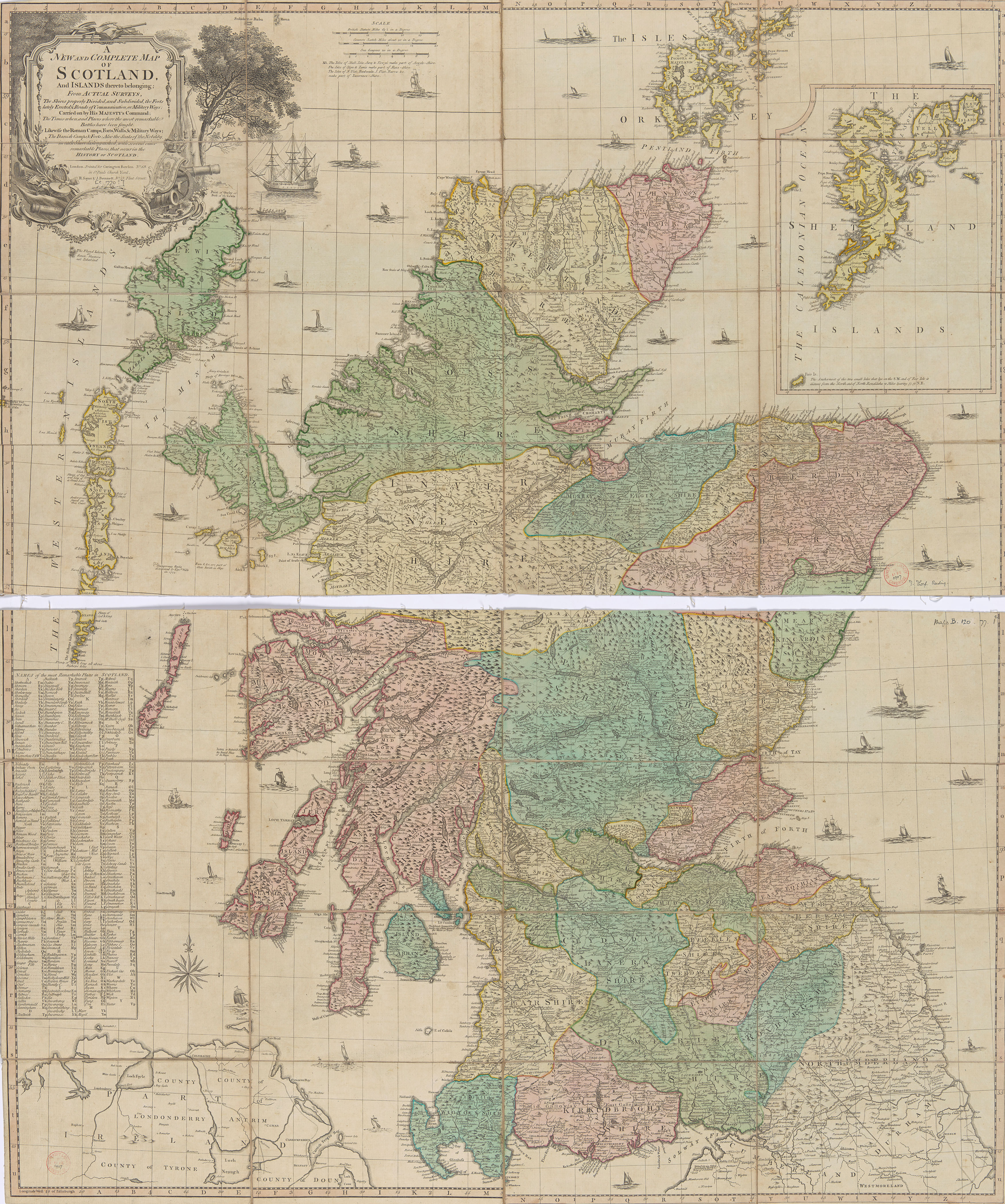 A New and Complete Map of Scotland and Islands Thereto belonging. London. In this undated map, the names in the advertisement are reversed, and John Bennett’s name joins that of Robert Sayer. (Reproduced by kind permission of the Syndics of Cambridge University Library, Maps.b.120.77.1)

A new and complete map of Scotland, and islands belonging thereto. Robert Sayer, 1773 | Scroll to zoom 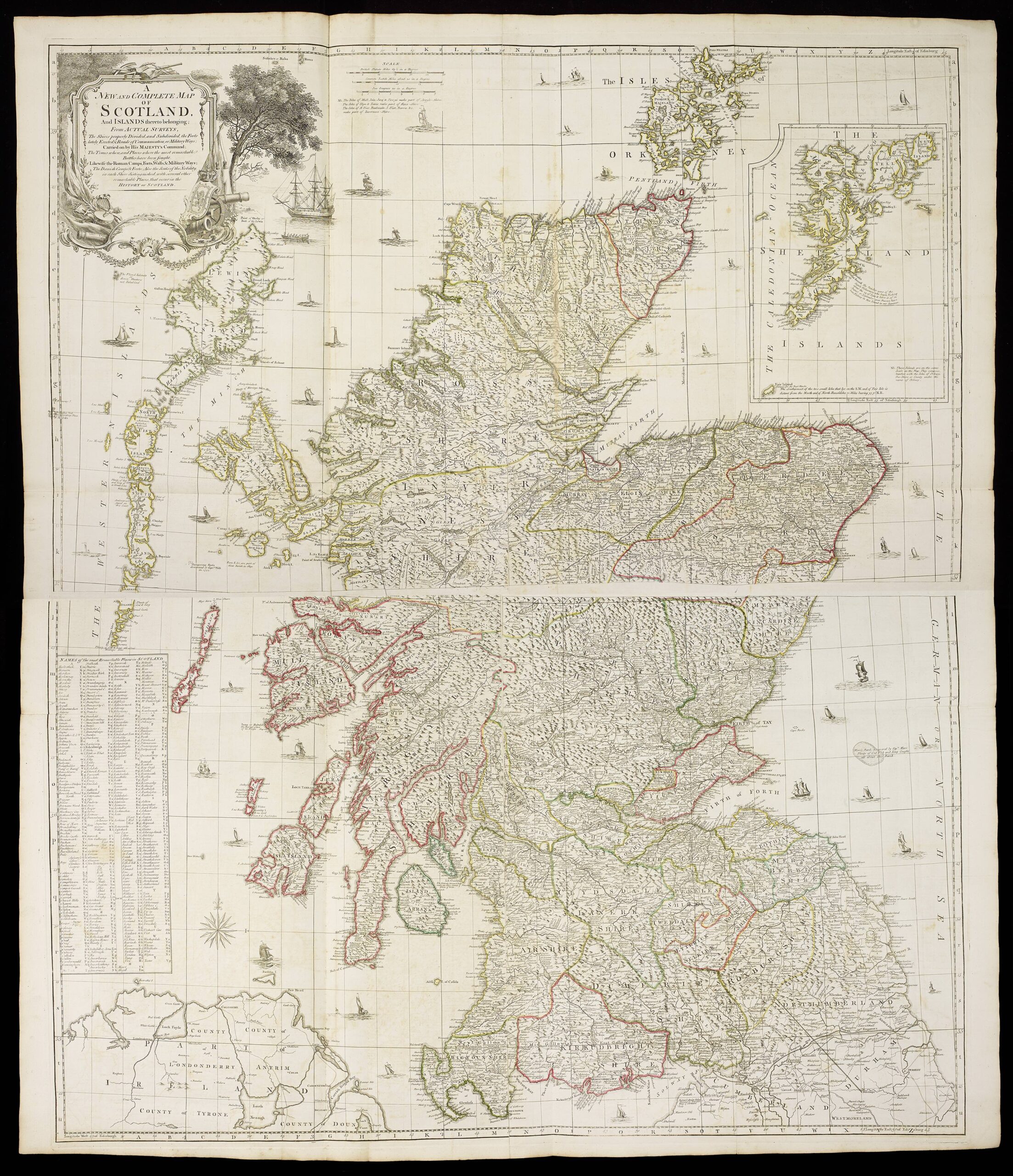