During the eastern Australian gold rushes of the 1850s diggers poured into the goldfields of Victoria and NSW from around the world. Gold also attracted skilled immigrants, stimulated new industries and offered new commercial possibilities. Although mining itself was heavily regulated, the government could not keep up with the demand for information on where to mine. One person who sought to fill this need was Frederick Proeschel, a mattress-maker and upholsterer by trade, who arrived in Melbourne from France in 1852. In 1853 Proeschel published his first map, entitled Pocket Map of all the Mines in Victoria, which was lithographed by James Philp, with whom he was sharing premises. The map was on a conveniently sized scale of 23 miles to an inch, with a rectangular grid of ten-mile squares to assist the user. Released in 1853, Proeschel’s map met with mixed reviews from the Argus and the Herald. However, this did not stop Proeschel from writing to the Colonial Secretary and suggesting that the Government purchase copies of his map for all Government departments to assist officers with their travels.

Not long after Proeschel completed his goldmines map, Philp (who had lithographed two maps for Proeschel, including the goldmines map) issued a copy of Proeschel’s goldmines map, altering its title to Map of the roads to all Gold Mines in Victoria. Proeschel was beside himself, writing a colourful letter in French to the Colonial Secretary complaining of the lack of copyright protection in the colony, and arguing that protection for artists was integral to the future prosperity of the colony. Unfortunately for Proeschel, the Colonial Secretary responded that, without such laws in place, there was no recourse for the map maker. In fact, the introduction of local copyright legislation would not be officially discussed in Victoria until 1862, in the Legislative Assembly. It would then take another 7 years before the first Australian copyright statute was enacted. 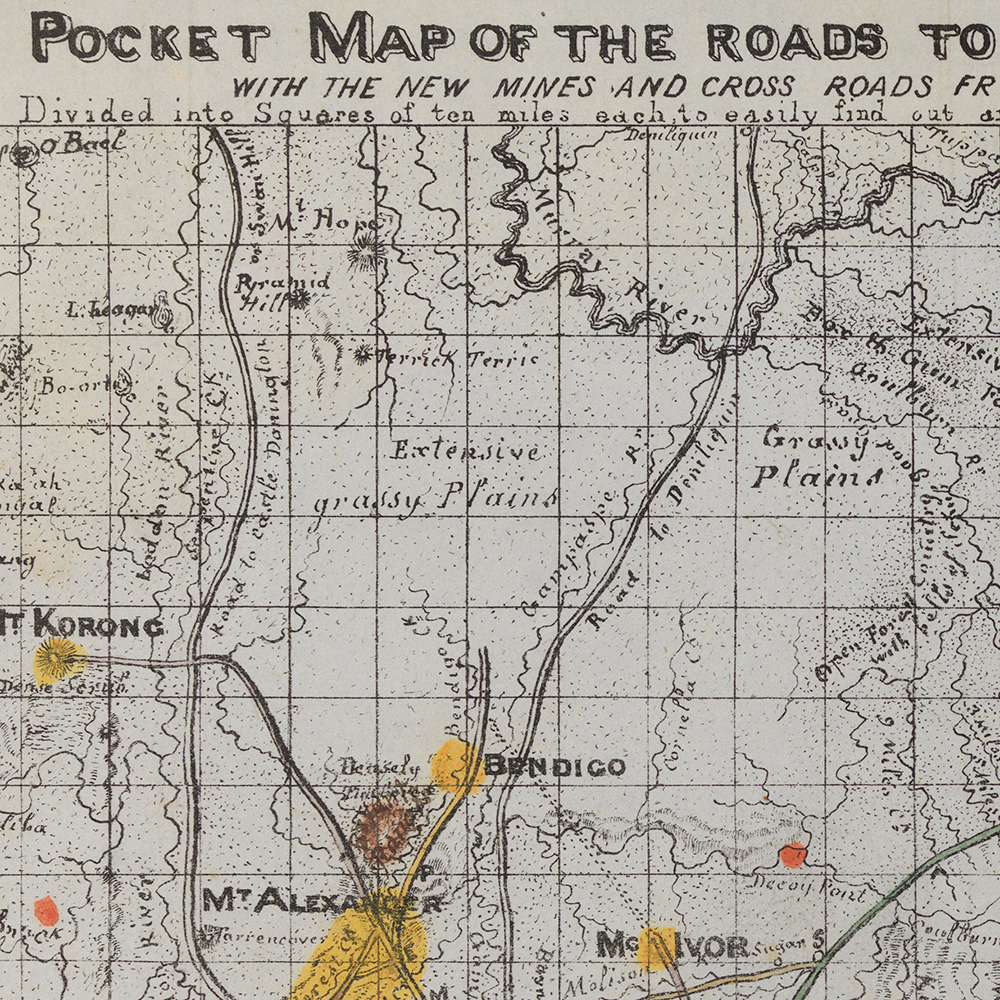 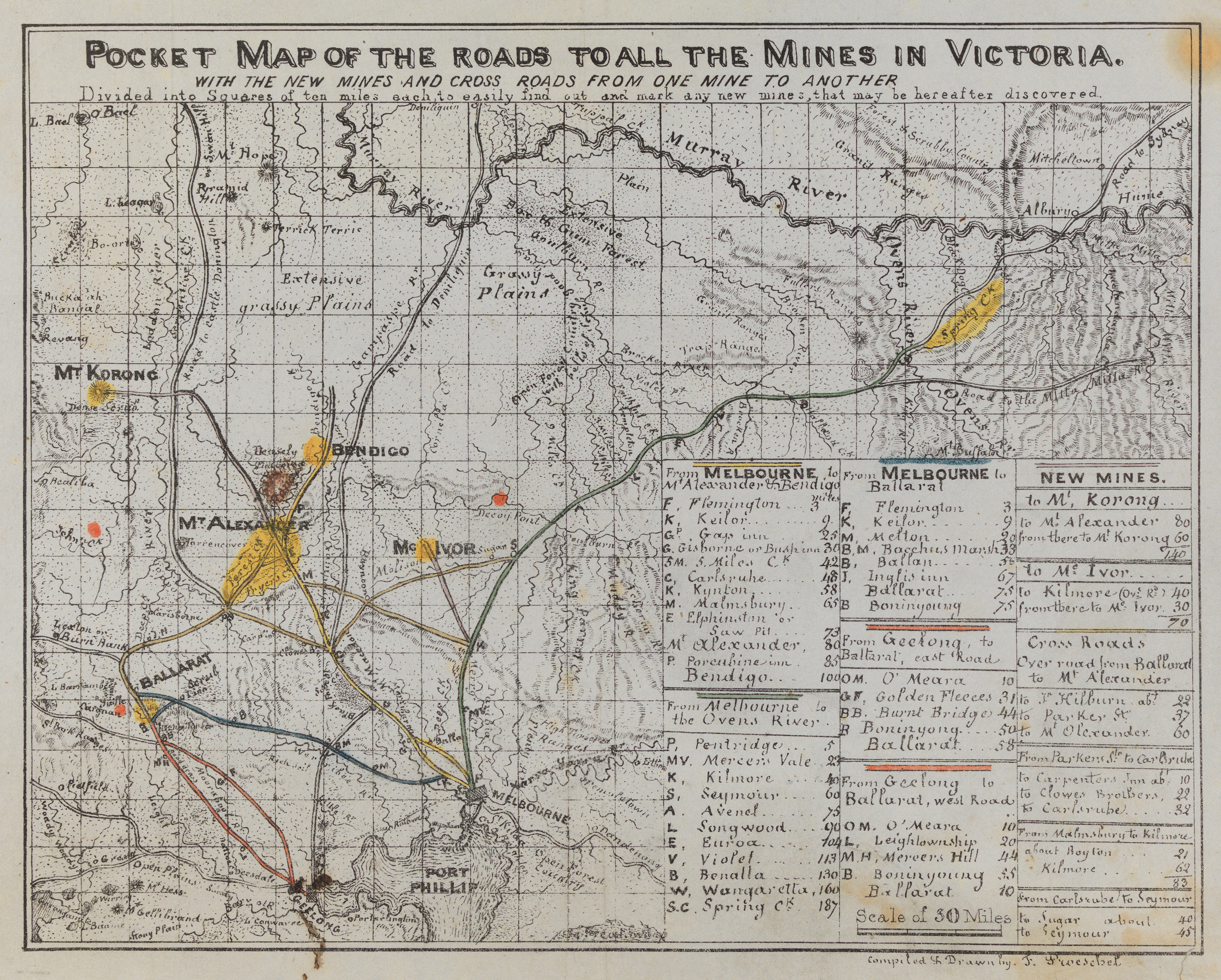 Pocket Map of the Roads to all the Mines in Victoria: with the new mines and the cross roads from one mine to another: divided into square of ten miles each to easily find out and mark the new mines which may be hereafter discovered/compiled by F Proeschel; on stone by James B Philp (State Library of NSW, Ce 86/2) 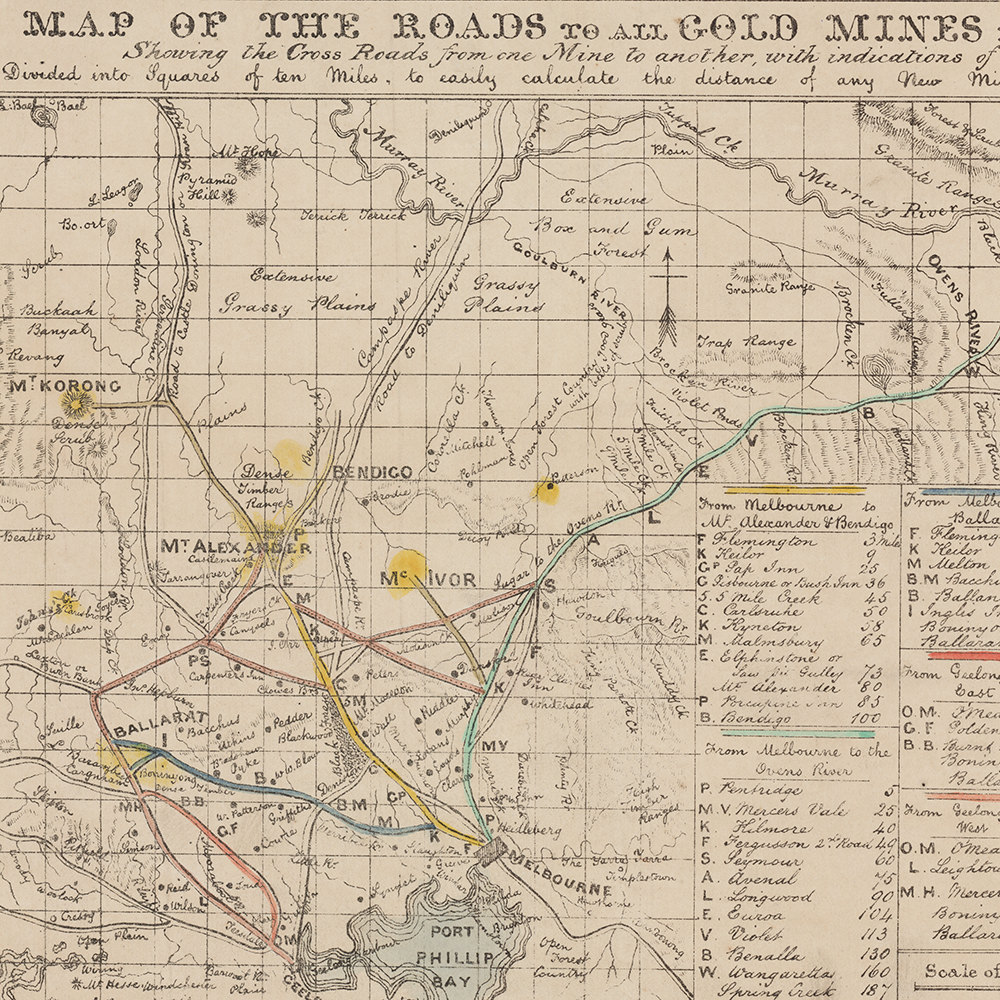 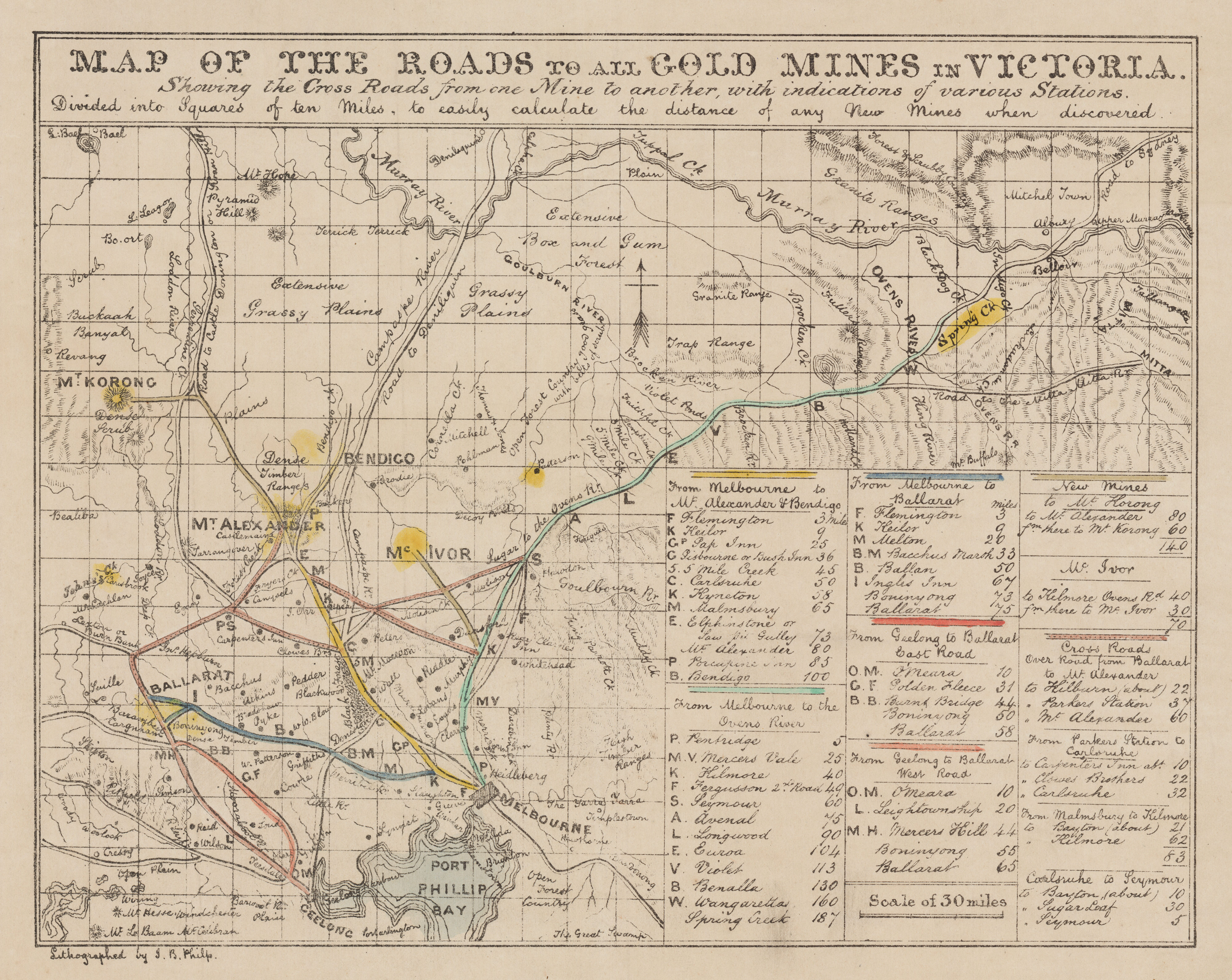 Map of the roads to all gold mines in Victoria : showing the cross roads from one mine to another with indications of various stations /​ lithographed by J.B. Philp (State Library of NSW, Z/M2 820/1854/2) 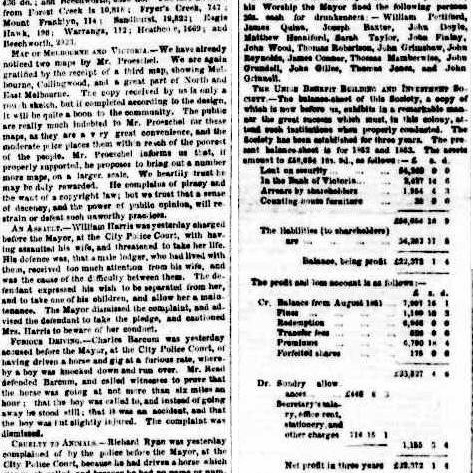 Article in the Argus reporting Proeschel’s claim of piracy 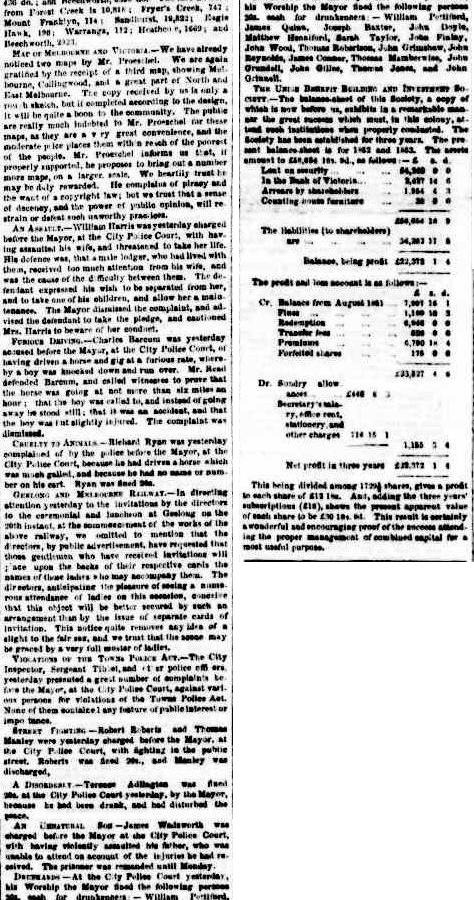 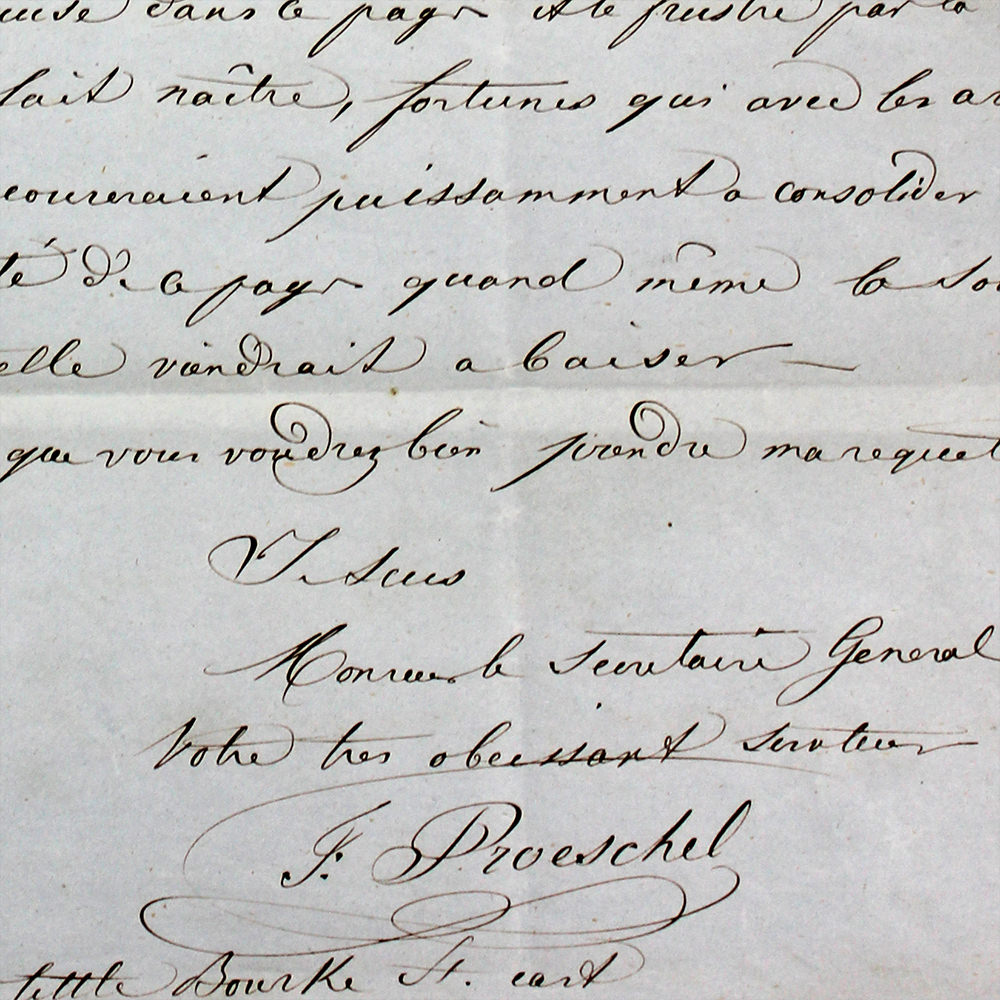 Letter from Proeschel to Colonial Secretary complaining about the lack of copyright law, 10 October 1853 | Scroll to zoom 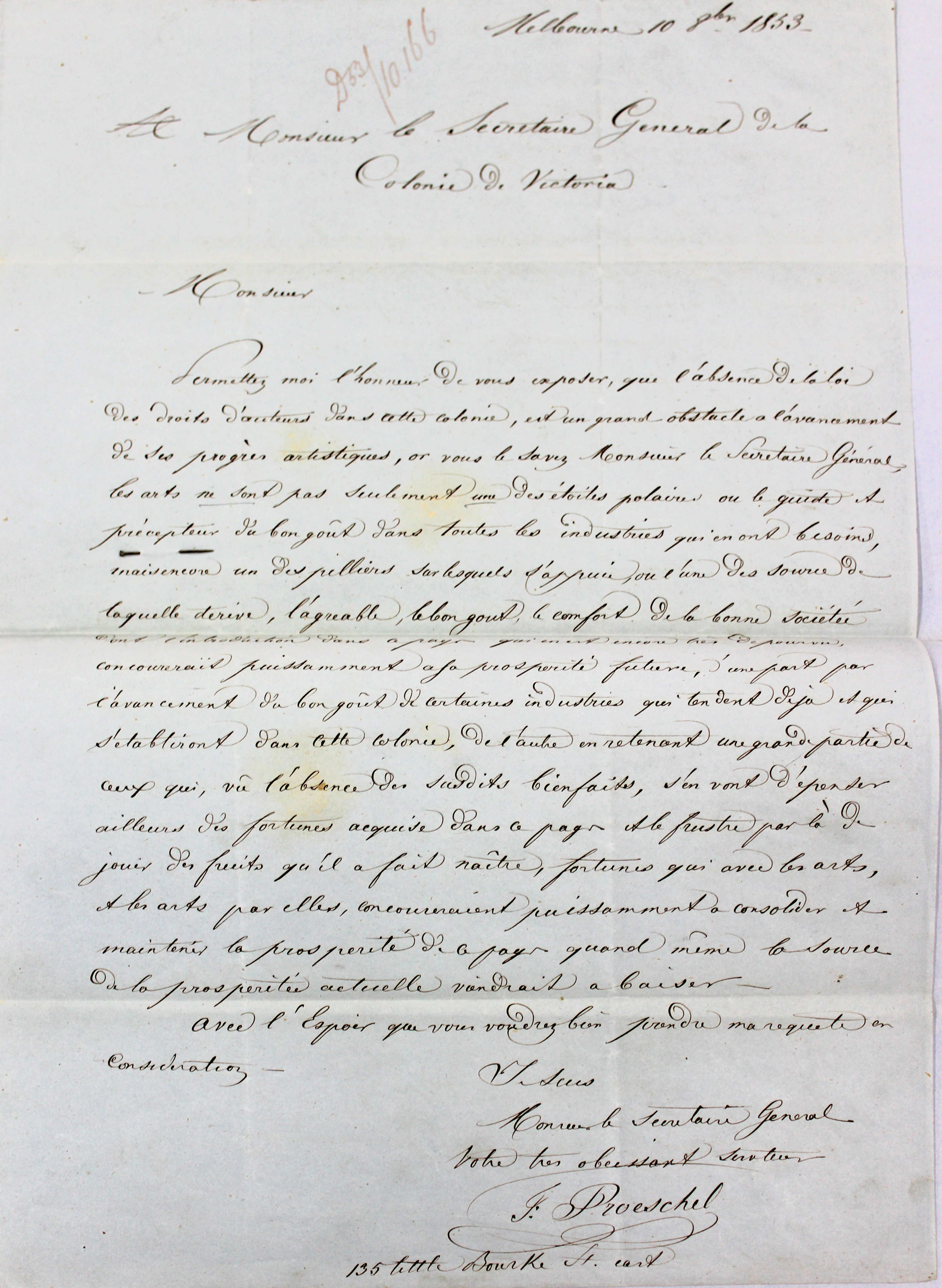